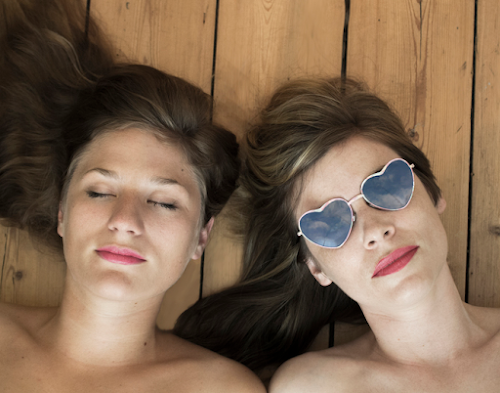 Introducing Transatlantic electronic pop duo Teenage Love, comprised of Katy Gunn, who hails from Brooklyn, NY and Anna Lidell, who hails from Copenhagen. According to their bio, the two met in 2011 during Anna's first trip to the states. In July of 2014, they joined forces in Mols, Denmark to cook up some songs at Lidell's family home. Between dashing down to jellyfish-infested waters and back up to the house (to dry off in the tiny bathroom sauna), the pair managed to record a series of songs for their upcoming EP. Back in February the (well-beloved) international music blog Hillydilly discovered Teenage Love and wrote:


"The electronic-led production on the piece is ambitious, playful, unfamiliar, and sporadic, and with the two lead vocalists playing occasionally off of each other in harmony, there’s a sense of fun surmised that simply can’t be duplicated with any other act out right now."

Recently, the duo shared their rather intriguing new single entitled "Lazer Eyes", which serves as the second track following "Gold" to be taken from their forthcoming self-titled debut EP due out this summer. Listen to "Lazer Eyes" below and while you're at, also be sure to check out their video for "Gold". It's some pretty impressive stuff!

Posted by Wonky Sensitive at 9:10 AM