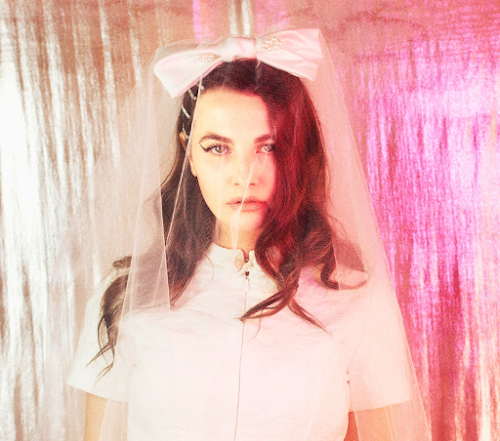 Following the release of her single "Swim Far" earlier this year, which earned a well-deserved spot on our Best Songs of 2019 (So Far) list, Berlin-via-Tel Aviv pop artist Lara Snow returns today with her latest offering called "Butter Knife", which also serves as the second single from her upcoming debut EP titled Delete Forever that is slated to drop this winter.

"Butter Knife" is a powerful pop anthem that spurs to take responsibility over your own life, and not to wait around for someone else to come and take you somewhere better, the decision to be the ruler of your own path. The single's accompanying video is a collaboration with a Berlin based artist - Natasha Gro, and it was directed and shot in Berlin by Jonatan Harpak (who also holds the credit for Lara's previous music video for "Swim Far"). The office scene in the video was inspired by the visuals of the TV series 'Peaky Blinders' and the idea of being your own boss, create your own reality and fight for what you believe in. "We chose to show the many characters that one can be - the artist, the boss, the star, the person." says Snow. "We are built from so many different pieces and they are there to help us become who we want to be."

"'Butter Knife' was written on a cold winter night in Berlin." Snow shares. "Coming from a warm climate country, the weather made me blue and I kinda stayed home for a while, just writing. I was feeling sad and started blaming it on the weather. At some point I realised that happiness can only come from your state of mind, so I wrote 'Don't blame it on the weather, blame it on your dark heart', at first, this wasn't supposed to be part of 'Butter Knife', it was just another piece of melody and lyrics I had, but it felt like a perfect match so I recorded it and the song was whole."

Watch the video for "Butter Knife" below.


"Butter Knife" is available now on all streaming platforms. Get it here.