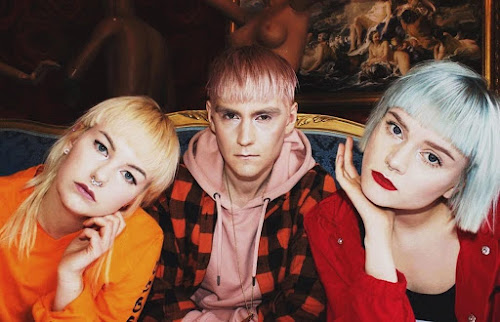 Hailing from the tiny Twin Peaks’-esque town of Pajala in the remote northern corner of Sweden, 21st Century fuck-pop trio The Magnettes, who think ugly and weird is cool and that the patriarchy needs to be crushed, have today unleashed their anthemic new single called "Renegades", which also serves as the sixth single following "So Bad", "Young and Wild", "Sad Girls Club", "Bones", and "Killers In A Ghost Town" to be lifted from their debut album, Ugly Youth, due out tomorrow (June 30th) via DigSin.

Speaking on the track, The Magnettes explain:

"['Renegades'] is about getting bruised up on one of those Northern summer nights when the sun never goes down. Vittula, mentioned in the second verse, is the traditional name of a part of Pajala where people had lots of babies. The literal translation of it is 'The Pussy Moor'."

Mixed by Christian Cummings, who has previously worked with the likes of Tiësto, Icona Pop, and Florence + The Machine, The Magnettes describe the themes of the album as being "mainly about adolescence and identity, coming to terms with who you are and finding your place in the world. It’s also about friends, fucking, fighting and drinking. One pretty central theme for the album was the idea of an alternate universe where the tables were turned, the freaks had taken over, the goths were cheerleaders and cool kids, and being weird was just normal."

Listen to "Renegades" below.

https://www.facebook.com/themagnettes
Posted by Wonky Sensitive at 8:24 AM